Within the film excerpts that I generated, there were a lot of scenes of credits to perhaps the end of a film, which I decided would become a theme within my piece. The idea of symbols, words and numbers were resonated throughout the 60 second film that kind of reflected a countdown or a transition bridge to another snippet of film. The entire film had a dry atmosphere in terms of content, so I wanted to resonate or highlight this in the physical nature of the film, so bleaching and scratching were used throughout the film. A technique I tried was cutting out the squares of footage on the original film roll and sticky taping them back onto a clear film roll. This worked in the segment towards the end, however was making things difficult to playback. Decasia: Excerpt Three (Bill Morrison, 2002) (https://www.youtube.com/watch?v=zLqN4eZE8Pk) works showcased what I saw as a “ghost-like” effect with an iridescent feel that I wanted to explore in terms of rhythm. I interpreted this stimulus as a reoccurring theme or a mirror of the same thing. I achieved this throughout my project by using an arithmetic channel effect that changed the motion and red value of a duplicated piece of film. The physical effect on the film served as a transition tool to the next segment rather than using editing transitions in Premier Pro.

Bill Morrison’s 2002 video of Decasia: Excerpt Three assisted in gaining an understanding in how I was going to explore rhythm. Without the assistance of music, rhythm for me included the idea of a reoccurring theme or object, this then later developed into the same thing more than once. In the beginning of this film is where I drew my inspiration and started to explore how I could duplicate the same snippet of film and play it back at the same time. This lead to the steps on premier pro:

This allowed a ghosting effect that shadowed the same film piece that mirrored the footage. This was a major development tool as it brought a new aesthetic to the symbols used throughout the piece.

Tribulation 99 – Alien Anomalies under America (Craig Baldwin) (https://vimeo.com/44038179)  was another source of inspiration in how to use words and symbols effectively within a film. He uses narration type series of words that take up the majority of the screen and force the responder to read or at least try to read the words in order to make sense of their size. This is some credit within my piece as I found a countdown segment or perhaps a logo of some sort within my film collection. I decided to slow this exposure down and almost invite the viewer to try and make out the words or representation of it with the assistance of a video affect that focuses on the area of letters.

In terms of manipulating the film, I used common household substances such as bleach, scissors and acrylic paint. In one section where the canvas seems to turn a green colour, bleach was applied for a maximum 10 seconds and then washed off under a tap. This was an extension of just leaving the bleach over a period of time, as i started to notice different reels of film reacted differently, with some the film wasting away to nothing but a clear film.

Another interesting approach I experimented with in the process of altering the film physically, was cutting out the squares of the film that only contained the picture, and then sticky taping it onto a new piece of clear film. More of an experimental approach to the “rhythm” of the piece being dis-jolted and timed over an extra beat. This proved to work in the first run filming, however the room for error was enough to only include it momentarily in the project.

This entry was posted in MEDA201, Uncategorized and tagged Cameraless Film, MEDA201, Rhythm.

Filmmakers are experimenting with a new line of aesthetics by manipulating film stripes by using various chemicals and physical effects to convey abstract and new affects on the responder.  Common techniques include the photogram, luminogram and the chemigram. These vary from the use of chemicals to stain the image, laser lights to affect the exposure and the surface in which the image is created.

Works that have been showcased display high signs of shutter, flickering and almost a strobe like atmosphere to them all which is a recurring theme of the time. The process in which the film is fed into the machine replicates this with each slide constantly being changed over. I felt the impression when watching the videos of a horror/macabre cinematic feel, then in others  there was a sense of cryptic or alien language to them. A lot of these examples from the workshop made me feel like I physically had to concentrate on focusing on the content.

For my own edits on the film, I’ve used bleach and acrylic paint, as well as physical tools to manipulate the film in which I’ll observe in the next class when it’s converted to digital film. From what looked like credits to the ending of a film, I went for the same kind of feeling the previous videos I saw, in that creepy, predominantly black and shuttering colours. 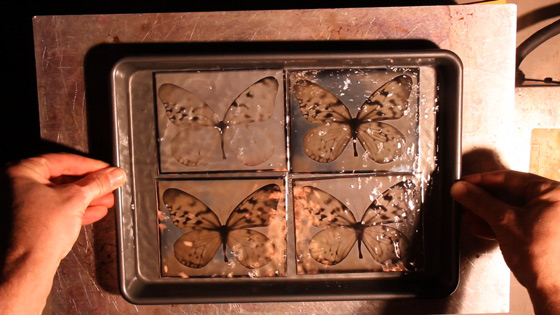 This entry was posted in MEDA201 and tagged Cameraless, film, media arts, Photography.